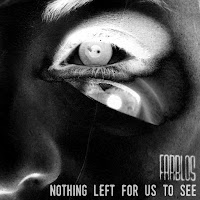 Finally all work on the Farblos debut album is complete!

After two years of work F. Karnstein and producer Fabian Zirkler finally agreed on the last mix versions for Nothing Left For Us To See, and Fabian and his colleague went into mastering the other week, so that the digital release is now due - one day before Hallowe'en.

First and foremost you will be able to download the album on Farblos' BandCamp account, including a detailed PDF booklet with all lyrics, credits and infos.
But you will also be able to get it on all the regular music download sources like iTunes and Amazon (though without the booklet).

Note that for the moment this is a digital release only!
We are working on physical releases for all you out there who have asked for records and CDs in the past.
They are definitely going to come, but several unpredictable problems have resulted in some unfortunate delay.

The album will contain 10 tracks, some of which will be re-recordings of demo tracks that have never been completely satisfying, while others are completely new, covering a range from dark synthpop via Cold Wave and Post-Punk influences to Ethereal Wave tracks, with most songs being somewhere in between.

Join us on the Facebook event!
Posted by Karnsteyn at 07:57